When I was a kid, the Coca-Cola Company introduced a catchy jingle that caught my attention. This is amazing because I apparently had the attention span of a gnat. It became my favorite song to sing. The lyrics, “I’d like to teach the world to sing in perfect harmony,” thrilled me. I loved seeing the faces of people from all over the world and hearing them sing together. Who knew that one day I would travel the world working with singers? Even at such a young age, uniting the world through singing resonated with me. If you’re not familiar with the commercial, Coca-Cola has remastered it and you will find it here. The Hillside Singers released a single and it became a hit.

Speaking of Coke, you realize that we Southerners call all carbonated soft drinks Coke, right? Note: Add at least a couple more vowels to each word below for authentic pronunciation.

Mini-Me: I want a Coke, please.

Server: What kind can I get you, honey?

Server: Okay, sweetie. If you need anything else, just holler!

It took me years to shake that habit. My friends at Westminster called soft drinks pop, except with the brightest ah vowel imaginable. I once accidentally ordered drugs instead of a Coke at a restaurant in Spoleto, Italy. Fortunately, il cameriere (the waiter) had a laugh and brought me a cola instead. However, I digress. I still have the attention span of a gnat.

I’ve spent much of my life on the other side of the baton. The evolution from singer to conductor was a natural one for me. The conducting bug officially bit me at Westminster. I could imagine pursuing nothing else. Because of my love of singing, I initially considered a dual degree in Vocal Pedagogy and Choral Conducting for my master’s. It quickly became clear to me that making music with ensembles was more exciting than studio teaching. This is not shocking. I’m a Leo and we like to be the center of attention. Imagine how crushed I was once I discovered that most musicians don’t even watch the conductor.

Perhaps instead of merely watching, we need to connect. This connection with the ensemble and the beauty of sound and spirit released into the world, changing the performers and audience members for the better, is miraculous to me. We truly become one voice. In fact, a study in Sweden suggests that our heartbeats synchronize when we sing together. I’m awestruck by the beauty we can create when we work together. Call me crazy, but let’s serve up more of this, please.

As the conductor, we are the first to receive the collective sound and it can sometimes be spiritually and emotionally overwhelming. Yes, there are times the sound is unholy, but it’s beautiful most of the time. If we are vulnerable to the music and to one another, amazing artistry will result. I also find it striking that, as performing artists, we are both the artists and the art at the same time. In a nutshell, conducting is awesome!

How wonderful the world would be if we could learn to “sing in perfect harmony.” The lyrics to the jingle that inspired me as a kid have stayed with me throughout my life. In fact, it was the inspiration behind the name Choral Planet, a utopia where the entire planet sings.

What inspires you most as a conductor? 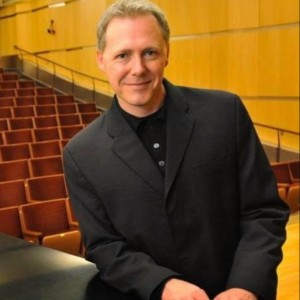 Tony Thornton is an award-winning musician and author who lives in Massachusetts with two fabulously spoiled cats, Lily and Oliver. He is the Director of Choral Studies at UMass Amherst and the Founding Artistic Director of Illuminati Vocal Arts Ensemble. His career in choral music has taken him to 24 states and 21 countries. Visit him at www.tonythornton.com.
All Posts »
PrevPreviousWhy We Sing
NextA Passion for the PlanetNext